Officers receive certified training suited to a hospital environment, such as assisting patients and families 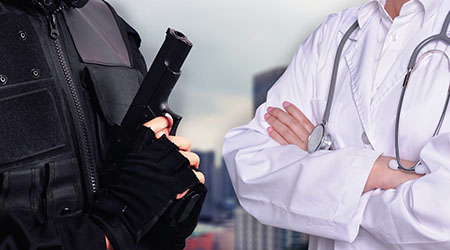 Institutional and commercial facilities nationwide are rethinking its relationship with local law enforcement. At the same time, healthcare systems in particular are taking steps to better protect staff and patients from increasing incidents of workplace violence. So it should come as no surprise that at least one hospital has taken its security needs into its own hands.

Columbus (Indiana) Regional Hospital (CRH) has established its own police department, according to The Republic. The in-house department was formed last December by the hospital’s board.

Assistant Chief James Webster said the department performs traditional law duties, such as seeing to the safety and security of individuals on the CRH campus, investigating crimes, completing reports and making arrests if necessary.

Officers also receive certified training suited to a hospital environment, such as assisting patients and families that might be going through a personal crisis and creating personal connections with patients to help de-escalate situations. They might only exercise police authority on property that is owned, leased or occupied by the hospital, Webster said.

Webster said that over the past seven months, the department has been working to hire staff and provide training. As of July 26, there were 15 hospital system officers, including six sworn and nine unsworn, though he said that these numbers will change as more people are hired and go through the Indiana Law Enforcement Academy training required for sworn officers. They plan to have nine sworn officers and seven non-sworn by the end of the year.

The key difference, Webster said, is that sworn officers have the ability to enforce the law. They are also able to investigate, make arrests, issue citations if needed and have more power regarding detentions.