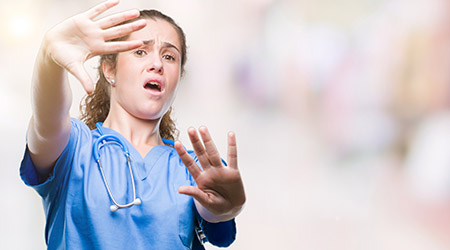 Healthcare facilities already are struggling to find and retain workers -- especially those on the front lines -- to handle the surge of patients fighting COVID-19. As new cases and hospitalizations rise, healthcare facility managers also face a rising tide of workplace violence in hospitals that threatens staff safety and security.

In Oklahoma, a woman arrested in connection with the shooting of a Tulsa’s Hillcrest Medical Center security guard faces assault with intent to commit murder charges in Indian Country, according to Tulsa World. The woman is alleged to have shot the armed guard in his chest in a parking lot, according to an FBI criminal complaint filed Friday in Tulsa federal court.

The security guard, who was wearing a bulletproof vest, had minor injuries, according to the complaint. The guard returned fire, striking Alvarez’s hands, arms and torso.

In Massachusetts, five people, including four nurses, were recently injured in a single incident involving a physical altercation between a patient and five staffers at one of Newton-Wellesley Hospital’s behavioral health units, according to Boston 25 News.

A nurse told police the patient was upset with a counselor and tried to swing his arm in an attempt to punch him in the face. Other nurses tried to calm him down. The patient became physical, with his arms and legs flailing.

The case came a week after a patient at Lowell General Hospital was accused of hitting a nurse in the back of her head with a fire extinguisher, according to Boston 25 News. The 65-year-old homeless man was arrested at the hospital’s Saints campus for assault and battery with a dangerous weapon. The nurse was discharged following the attack and is recovering at home, the hospital said.