Seismic compliance: Is your hospital on track? 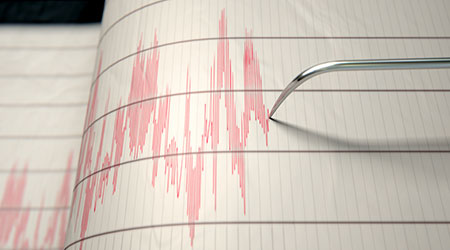 Will the recent seismic event in California be just another reminder of the critical need for seismic compliance for hospitals and healthcare systems, or will it be a catalyst for change?

Not only were the two major quakes in Ridgecrest, Calif., on July 4 and 5 the biggest in a decade — at magnitudes 6.4 and 7.1 — there were more than 80,000 aftershocks with more than 70 of those measuring magnitude 4.0 or more.

“For those of us with first-hand experience with earthquakes, we take them even more personally,” said Chris Hickman, Petra’s Assistant Vice President, Planning & Design. “I was living about 4 miles away from the Northridge earthquake when it struck at 4:31 a.m. on January 17, 1994.”

“From that quake I learned three key lessons that I take to heart today as a structural engineer,” Hickman said. “First, there will be no warning immediately before the next big earthquake — it will hit when and where it wants to.

"Second, well-engineered, well-configured buildings will perform better than those built before the development of modern seismic resistance techniques. I was sleeping on the top floor of a three-story townhome built in the 1990s and, while it shook and swayed, it did not fall down. And third, organizations that are prepared will fare better during an earthquake, immediately following the event, and in the longer term. Forewarned is, indeed, forearmed — as long as you take action.”

Scientists are urging the public to prepare for future events. Will healthcare leaders also take action and get serious about seismic compliance and preparedness? It’s not only important for hospital buildings themselves to fare well in an earthquake to protect those inside — staff and patients — but hospitals are also critical for providing ongoing emergency response and recovery for the communities they serve. While immediate impacts can be catastrophic, long-term impacts can be devastating too.

Yet funding seismic compliance and preparedness strategies can be challenging, especially within complex campuses and considering health care’s current economic landscape. But the investment impacts safety, protects against business loss, shortens recovery time and costs, and, most importantly, ensures hospitals can continue to consistently provide critical health care services to the communities that depend on them for care.

Seismic compliance became even more pressing for California healthcare leaders when Senate Bill 1953 became law in September 1994. Seismic vulnerability had been a growing concern in the state for generations, culminating in the Alquist Act of 1983 which established a state agency, the Office of Statewide Health Planning and Development (OSHPD) to oversee the seismic design of California hospitals, among other things.

Initial compliance deadlines have long since passed, originally 2008, extending to 2013, 2015 and 2020 in specific instances. Many organizations have pumped millions, if not billions, of dollars into upgrading and replacing vulnerable buildings.

So, in terms of compliance and readiness, how do California’s hospitals measure up today? While much has been done to build resilience into the state’s hospital infrastructure, more will need to be accomplished to meet the intent of legislation.

Compliance by the latest Jan. 1, 2030 deadline is on the radar for health care leaders. Though seismic compliance updates are in progress, 26 percent of hospital buildings do not meet 2030 requirements and 61 percent of hospitals have at least one non-conforming building.

The loss of these buildings during and after an earthquake could have a devastating effect on the resiliency of the community, both immediately following a seismic event as well as for the long term. Hospital shut-downs result in a lack of essential care that can’t be provided by outpatient clinics, which often do not have appropriately trained staff or the equipment required to serve the community’s health care needs, especially in a disaster response scenario.

A hospital’s inability to recover from disruption not only impacts community health by depriving it from critical health care resources, it also has significant economic consequences as well, including forced dispersion of patients to other areas, job and income loss from short- or long-term hospital closures, replacement of heavily damaged buildings, and loss of hospital revenue due to down time — which can last for years.

With about 10 years remaining, organizations that are not currently planning compliance approaches will be challenged to get there.

Craig Beam is president of Petra,   which was formed within St. Joseph Health in the late 1990s to respond to the California Senate Bill 1953 seismic compliance regulations. To learn more about seismic compliance and how to better prepare your hospital for the next quake in California, please send an email to info@petra.pro with Seismic Compliance in the subject line.