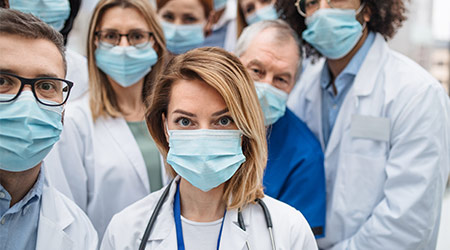 For the last year, workers in healthcare facilities have taken great pains to use personal protective equipment, practice social distancing and was their hands — all to prevent the transmission of the coronavirus from patients. All too often, though, workers apparently are less careful when interacting with co-workers elsewhere in the workplace.

Infection preventionists and other healthcare professionals should keep following infection prevention protocols even when they are on break or some other place in the hospital other than their workstations, according to Infection Control Today. That point has been made before, and it’s been backed up by a recent study. Published in the American Journal of Infection Control, the study looked at what caused an “exponential” outbreak of COVID-19 among healthcare workers at the medical center in March and April 2020.

Researchers found that infections occurred likely as a consequence of not wearing a mask in social situations, such as conversations and on breaks, adding there appeared to be a tendency to remove the mask in a situation that was considered social as opposed to work. Investigators also found that by the time one worker is found to be infected with COVID-19, it’s often too late to contain the spread.