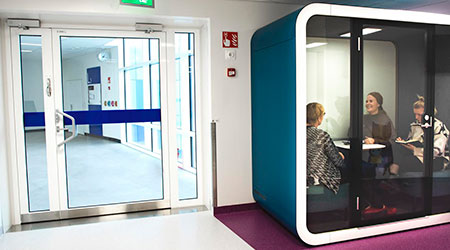 Our team annually picks a cause to support that has a distinct, philanthropic purpose. This year, Framery donated five soundproof pods to the Tampere University Children’s Hospital.

The team came across the Tampere Children’s Hospital Support Foundation when they were compiling research for this year’s cause, and found that the organization was actively raising funds for the newly built Tampere University Children’s Hospital. Specifically, Framery placed Framery O and Framery Q pods in the Child and Adolescent Psychiatry, Paediatric Haematology, and Oncology sections of the hospital.

After hearing more about the hospital’s needs and plans for the space, Framery realized that families around the world regularly experience a lack of privacy in hospitals – a problem that we have an aptitude to resolve. For instance, in the ER, it’s relatively easy for people to listen in on “private” conversations between doctors and family members.

Some hospitals try to mitigate the lack of privacy by offering earplugs to visitors, but the impact is minimal. Acoustic pods address the issue of privacy head on, offering a soundproof solution for sensitive conversations as well as the need for accessible solitude in a public space.

Susanna Lohiniemi, the Managing Director of Tampere Children’s Hospital Support Foundation, had filled us in on the many privacy issues she’s seen families experience. Unfortunately, Tampere University Children’s Hospital was no exception, and she always found this  inevitable circumstance saddening.

When we connected with Lohiniemi, she was thrilled and found that while at the company’s core we are a workplace product manufacturer, we happened to be a great fit for this project. After speaking with Lohiniemi in-depth and giving more thought to the matter, we realized hospitals are where people have to face the realities of mortality, the issue of personal privacy, difficult decision-making, and so forth – which led our team to feel empowered to help resolve the challenges posed by spaces, such as hospital waiting rooms.

It was the strong emotional message involved in this project that really drew us to it. We knew straight away that we wanted to reach out to the hospital and these families to offer them safe spaces once we saw that they were actively fundraising. It is so morally important that these private discussions stay between the doctors and families themselves – and our products could help smooth out that experience for all parties.

After the pods were officially installed, our team was excited to see the products in action, so we decided to pay a visit to the hospital and ask whether the staff had experienced any changes in their daily routines.

Anna Hemmi, Nursing Director of Child and Adolescent Psychiatry at TAYS said she believed that pods significantly help create privacy for both employees and families. She went on to explain that it is easy to pop into the pods and have confidential conversations about a family’s situation and needs – no reservation of the space needed.

Tuula Olkinuora, Head Nurse in Children’s Neuropsychiatry described that the benefits of the pods reach further than just the patients and their families. Doctors, psychologists and social workers, find a quiet space useful when, for example, making notes or dictating thoughts about appointments for later use.

Janne Räsänen, Head Nurse of Paediatric Haematology and Oncology at TAYS said that he sees individuals go into a pod and pretend to fill out forms, when really they might just be stepping in to just breathe and take a moment for themselves. And in the midst of a stressful situation, a moment of silence and tranquility is all it takes to restore a little peace of mind. From this philanthropic project-turned-case study,

Samu Hällfors is the CEO and Co-founder of Framery