How Hospital Design Can Save Lives

For some patients, time is of the essence and can’t be wasted navigating layout 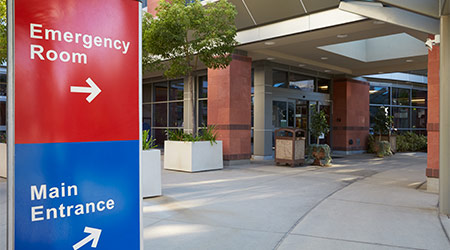 Despite its name, an emergency room isn’t necessarily the fastest way for patients to enter a hospital, depending on the facility’s layout, capacity and flow. For some patients, like expecting mothers, time is of the essence. The time spent during check-in and in the waiting room could be critical moments that make the difference between life and death.

After an in-depth analysis of the layout and way-finding at Self Regional Hospital in Greenwood, South Carolina, designers at McMillan Pazdan Smith saw the need for an elevator that would bypass the emergency room to provide direct access to the childbirth center. Within a few months of the design firm’s plan being executed, the elevator saved the life of at least one child.

“LDRP (labor, delivery, recovery and postpartum) specialists said an expecting mother who used the direct access elevator arrived at the childbirth center hemorrhaging,” said R. Cullen Pitts, Principal and Healthcare Studio Director at McMillan Pazdan Smith. “The team took her to the delivery room, where she was prepped for emergency surgery and her healthy baby was delivered via C-section within 10 minutes. The LDRP team were confident that the baby wouldn’t have survived if the process had taken another 30 seconds to 1 minute.”

The direct access elevator is one example of how hospital design can be re-examined as a tool that increases the effectiveness of the healthcare patients receive.

To provide quality healthcare, older hospital buildings must adapt to growing populations, new medical paradigms and evolving building code requirements. Owners and facility managers try to get ahead of this by rearranging existing departments, renovating or adding on to existing structures.

Part of this is due to the development and adoption of medical technologies like magnetic resonance imaging (MRI) and proton beam therapy, which require purpose-built spaces designed to accommodate the bulky, specialized hardware. Some hospitals place mobile MRI units in parking lots to mitigate this issue, but that's a specific solution that isn’t universal to all medical technologies or locales.

On top of that, hospitals often build addition after addition to keep up with population growth. The design of each individual addition must consider the hospital as a whole to avoid making navigation more difficult. Unfortunately, not all additions are designed with future flexibility in mind. Often, designers may try to satisfy budgetary or time constraints at the sacrifice of functionality. Over time, this trend leads to maze-like layouts with no thought for organization or efficiency.

Adding to the entry problem is the fact that many Americans avoid ambulances — which drop patients off exactly where they need to be — due to high costs.

From childhood, it’s drilled into our heads to call 911 in the event of an emergency, but the financial implications of a short ambulance ride can be serious, especially for people without insurance or those whose insurance doesn’t cover out-of-network emergency services. A short ride can leave patients stuck with thousands in medical bills with few options for recourse.

To avoid running up medical debt, many people instead drive themselves, or ask family or friends to take them to the hospital. Depending on their condition, this can be an unwise choice with life-threatening consequences, but that hasn’t slowed down the trend of people turning to rideshare drivers over ambulances to get to the hospital.

In 2017, The Washington Post published a story on exorbitant, unexpected ambulance bills. In 2018, The New York Times published a story titled, “Uber, Lyft and the Urgency of Saving Money on Ambulances,” which quoted a Harvard researcher who said, “Don’t reflexively call an ambulance. Ambulances are for emergencies. If you’re not having one, it’s reasonable to consider another form of transportation.”

Taking it even further, Slate published a 2018 article with expert advice on when people should call an ambulance and when they should opt for alternative transportation.

Surely, the trend to eschew ambulance rides in favor of cheaper methods of transportation has made emergency clinicians’ jobs more urgent in many cases, especially when people arrive at the general emergency room entrance with illnesses or injuries where time is of the essence.

Right, wrong or indifferent, the expediency required for these cases must be considered in hospital design.

When McMillan Pazdan Smith was in the design-development phase of Self Regional Hospital, the firm utilized virtual reality (VR) technology to allow doctors, staff and administrators to “walk through” a digital mock-up of the renovation, which included the emergency department, behavioral health pod and observation pod. Upon touring the VR version of the new hospital, physicians realized the orientation of the behavioral health pod and observation pod needed to be flipped for better flow within the hospital.

The primary purpose for hospitals is to save lives. But they can’t exist if they aren’t bringing in revenue and stretching each dollar as far as it goes. Bringing in the latest medical technology can draw more patients (and revenue), but if it’s implemented at the sacrifice of circulation, flow and wayfinding, the overall life-saving efficacy of the hospital can be undercut.

Though a given hospital might have a limited budget and timeline allocated for a renovation, thoughtful planning must be lent to the project before work starts. In the case of Self Regional, a detailed analysis was undertaken of the entire hospital’s layout to understand where the hospital was lacking and how the shortfalls would be overcome. The childbirth center direct access elevator was born from this analysis and within a few months of its construction, its placement already saved the life of a newborn, preserving all of the wonder, joy and potential that exists within that child.

While hospital design isn’t typically thought of as a lifesaving tool in the same light as a defibrillator or ventilator, in dire situations it most certainly can make the difference between life and death.

Sara Robinson is an associate in the Healthcare Studio of McMillan Pazdan Smith, a regional, studio-based design firm with offices in Charleston, Greenville and Spartanburg, South Carolina; Asheville and Charlotte, North Carolina; and Atlanta, Georgia. She can be reached at srobinson@mcmillanpazdansmith.com.