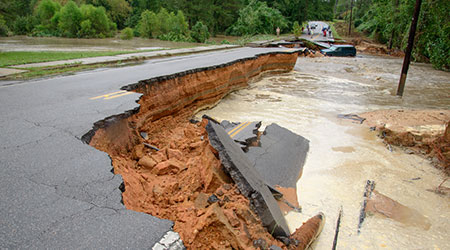 Nature has not been a friend to the Medical College of South Carolina (MUSC). From regular tropical storm surges and regional flooding to Hurricane Katrina and Superstorm Sandy, the organization has weathered regular threats to its facilities and operations. It even went so far as to upgrade an entire building in order to elevate key equipment out of the range of flood waters that are all too common in the region’s low country. Now the medical college is taking another step to protect itself.

A key mitigation project aimed at bailing out Charleston’s medical district during major flooding events is headed for approval, and it’s just one of the strategies the medical university says it’s employing in the face of frequent tidal events, according to the Charleston Post and Courier.

The MUSC Board of Trustees will need to approve an easement to build a drop-shaft tunnel that will connect with a larger drainage system that flows into the Ashley River.

Hospital officials said the major drainage project is just one MUSC is engaged in to reduce flooding. Flood planning in the medical district is naturally shared by the institutions that call the few square blocks downtown home.

Brad Taylor, chief facilities officer, told the MUSC board of trustees that several strategies make up MUSC’s efforts to draw water away from the hospital’s campus. Trees, which can consume 100 gallons of water each day, have been planted. The stormwater drainage system has been cleaned of debris. The hospital district’s greenway includes permeable pavement that can retain water. Utilities have been raised above flood level, and more are in the process of being elevated. Flood gates are installed.