The equipment is made using a water-jet machining process 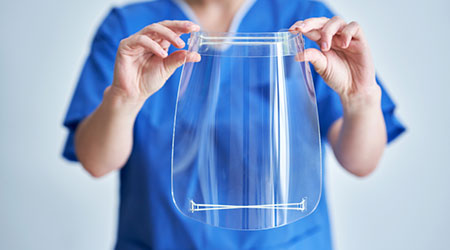 Kentez Craig, a graduate student at Georgia Tech’s school of mechanical engineering, is working with a small team of Georgia Tech faculty and students to design and build critical protective gear and medical equipment to help first responders battle COVID-19, according to an article on the NBC News website.

Craig said his parents’ devotion to public service (they are both first responders)  inspired him to take action.

Over the past few weeks, Craig’s team has provided thousands of face shields to medical facilities across the country, as well as roughly 200 intubation boxes. The face shield design they created has been used to produce nearly 2 million of them.

Georgia Tech is home to one of the most robust student-run engineering makerspaces in the country, the Flowers Invention Studio, which Craig helps run during the school year. Craig, who specializes in water jet machining, said the process is much faster than 3D printing, which some other universities had been using to create face shields.