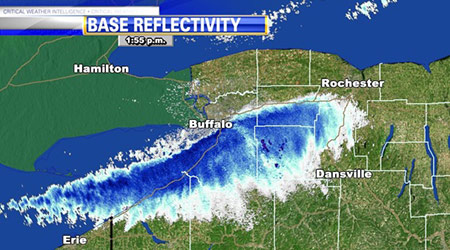 In late November of 2014, residents of the Buffalo, New York area busied themselves digging out of the heaviest winter snowfall event since the holiday season of 1945. Over five feet of snow blanketed some areas east of the city. This sort of extreme weather levies serious damage: thousands of motorists were stranded, hundreds of roofs and other structures collapsed, and, tragically, thirteen people lost their lives.

Perhaps this high toll would have been even greater had not diligent meteorologists caught the telltale signs of lake effect snow days before by studying lake temperature and wind trajectories at various heights. Officials warned of 3-5 inches per hour of precipitation over a day before the event began.[1]

However, this extreme snowfall did not appear on the T.V. weather map in the way such a major event usually does. The casual weather-watcher might have looked to radar imaging to make sense of the experience, but that most conspicuous weather instrument to most people was essentially blind to the phenomenon.

This sort of apparent failure could make it difficult for people to believe weather technology, or create doubt in the minds of officials charged with making tough decisions for public or institutional safety—and each of those outcomes could endanger communities.

While Doppler radar is a critical tool in evaluating weather conditions, it is important for institutions to understand the mechanisms it employs, its strengths and weaknesses, and available methods for analyzing raw radar data. Why does it seem like radar got it wrong for Buffalo?

RADAR, or RAdio Detection And Ranging, was a new technology when Buffalo saw its last huge snow event. Developed during World War Two, radar was first used for military applications. The tool could detect the position and movement of an object, like an enemy airplane. So, when radar operators on battleships picked up signs of rain, it made their jobs more difficult by cluttering radar data with unwanted information. Then, after the War, that clutter became the target.

The first generation of weather radars were cutting edge at the time, but were rudimentary compared to today’s systems. Radar works by sending out radio waves, short bursts of energy that bounce off of objects at nearly the speed of light. When waves bounce back in the direction of the radar dish, their direction reveals where an object is relative to the system. These waves are sent out in bands.

The first weather radar system, installed in Miami in 1959, could only send waves along horizontal bands, and operators had to manually adjust the elevation angle. This meant that the information radar could provide about an object was limited to a single plane. A ball and a cylinder would look the same as each other on the radar screen because only one dimension of an object was accounted for.

The next generation of radar, embraced in the late 1980s and early ‘90s, offered more information than simply location with the introduction of Doppler technology. The major advance that Doppler radar provided was that it could measure an object’s velocity. These radars can detect what is moving toward it or away from it by analyzing the shift in the frequency of returning radio waves. (Still, radar cannot ‘see’ what is moving orthogonally to the beam.)

This allows atmospheric scientists and meteorologists to identify additional characteristics in a storm. For example, they can identify the presence of rotating winds in the atmosphere, which can be a strong indication of a tornado. Generally represented in today’s system as bright red juxtaposed to bright green, data on wind speed and location provides greater insight into such important weather events such as tornadoes.

The radars the National Weather Service (NWS) uses today form a network of 171 radars located throughout the United States. In 2007, Baron Services, along with their partner L3 Stratus, were selected to work with the NWS to modernize the entire network of radars to add Dual Polarization technology.

Early Doppler systems had not resolved a major limitation inherited from previous generations: the single plane of weather information. Embraced in the mid-2000s, dual-polarization technology changed that.

By using both horizontal and vertical pulses, dual-pol radars offer another dimension of information on objects—a true cross-section of what is occurring in the atmosphere. With data on both the horizontal and vertical attributes of an object, forecasters can clearly identify rain, hail, snow, and other flying objects such as insects, not to mention smoke from wildfires, dust, and military chaff.

Each precipitation type registers a distinct shape. For example, hail tumbles as it falls, so it appears to be almost exactly round to dual-pol radars. This additional information provides meteorologists and those responsible for monitoring the weather with very valuable information that allows them to make more informed decisions about the presence of hail, the amount of rainfall that may fall, and any change from liquid to frozen precipitation.

Dual polarization technology is especially useful in observing winter weather. Because it can differentiate between types of precipitation, it can identify where the melting layer is with precision. This allows forecasters to better evaluate what type of precipitation to expect, as they can analyze information about the path that precipitation will face on the way to the ground. If a snowflake will pass through a warm layer, for example, it may become a raindrop, and that raindrop may turn into freezing rain when it hits a colder surface.

Radar limitations – and how to use technology to fight back

Still, radar technology has its undeniable limitations. Only so much of the vertical space is observed, since the atmosphere closest to the ground and directly above the radar are typically not scanned. This is best illustrated by the cone of silence phenomenon. Because radars do not transmit higher than a certain angle relative to the horizon, there is a cone-shaped blind spot above each radar.

Also, because radio waves are physical, clutter can make data hard to parse. Tall buildings, for example, give no useful information to meteorologists, and could skew the data. However, Baron has introduced cutting-edge radar processing products that can closely analyze the data that returns to a radar to determine how the atmosphere has impacted the path of a beam. Importantly, though, computers are not the only way, or always the best way, to account for deviations in data. Thus, Baron’s human resources—their in-house weather experts—are daily engaged with monitoring radar outputs.

Nevertheless, radar cannot achieve every goal some members of the public expect it to. Drizzle, for example, does not show up very well at times, because of the extremely small size of particulates and the fact that most drizzle occurs below the height of the radar beam. So, people expecting dry conditions might be puzzled by slight sprinkles on their way to work. Another example, as mentioned earlier, is the difficulty of lake effect snow.

A lake effect snowfall occurs when cold air passes over the warmer water of a lake. This phenomenon is common in the Great Lakes region. Why does radar have difficulty observing it? The culpable limitation lies with the angle of radar beam. In the same way that radio waves are not typically sent straight up from the ground, they are also not sent directly horizontal.

Buildings, small topographical changes, and the like would foil the effectiveness of low-level radar sweeps in many cases anyway, but the further an area is away from the source of the beam, the higher the blind spot. Imagine a triangle with a small angle at one corner—the further the lines travel, the further they part. Lake effect snow is a low-level phenomenon. So, when Buffalo shivered under feet of snow in 2014, the radar essentially missed the event because the lowest beams passed over the highest signs of snow.

Reading the radar display: What to remember

Understanding the history of radar technology and knowing the source of the radar display can prepare anyone to better utilize radar information. Conscientious administrators and officials can recall these radar facts as part of their decision-making process when referencing radar data:

As apparent in the Buffalo snowfall example, the physical limitations of radar mean that a radar does not ‘see’ what occurs close to the ground. Additionally, since what radar ‘sees’ in the atmosphere is impacted by distance as the beam of energy continues to radiate away from the source, the precision of data can depend on the location of weather relative to the location of a radar. Some radar displays are compilations of data from multiple radars, and these multiple radar displays are often pieced together to account for gaps in radar coverage

• No one image tells the whole story.

Weather evolves in stages, so it is important to watch storm motion, growth and decay. When watching weather on radar, how it trends from one scan to the next should never be ignored. Evaluating trends allows watchers to better predict turbulent weather. Then, for the best results, avoid focusing on only one storm. People tend to watch a particular storm and not the entire picture, or what is down stream of the “worst” storm. This can distract from impactful conditions and trends.

• Raw data can be misleading.

Even when radar ‘sees’ weather accurately, it can at times mislead watchers. Virga, for example, is precipitation that evaporates before it reaches the ground due to drier air closer to the surface.  Just because the radar shows precipitation does not always mean precipitation will reach the ground. In some cases, there is no substitute for using other information to determine what is actually happening. That is why NEXRAD/Baron delivers more than just a radar image to give users a better understanding of what the weather is doing. It gives information on Severe Winds, Threats, Velocity, Hail Tracks, and other conditions.

Dan Gallagher is an Enterprise Product Manager for Baron.

https://www.weather.gov/buf/lake1415_stormb.html See the latest posts on our homepage
Share