As pandemic wears on, Americans are washing their hands less often and for less time 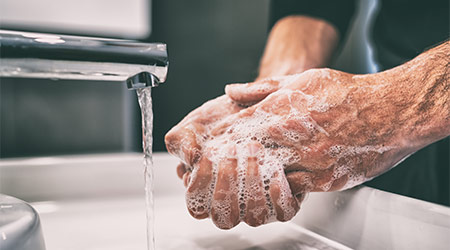 The lackadaisical approach is a stark contrast to the 81 percent of Americans who say they are concerned about contracting the coronavirus. Case in point, just 53 percent say they wash their hands after returning from a trip outside the home. Last April, 67 percent were washing after venturing out. In addition, just 38 percent are currently reminding family members to wash their hands compared to 54 percent last year.

“Handwashing has been shown to be a simple, safe and effective way to reduce the transmission of viruses and bacteria, including the virus that causes Covid-19,” says medical microbiologist Michael P. McCann, Ph.D., professor of biology, Saint Joseph's University. “It is essential that everyone maintain high-levels of personal hygiene and that we not relax our guard now that vaccines are becoming available. Washing our hands, wearing masks and practicing social distancing are all easy things that we can and must do as we try to overcome this virus and return to a more normal way of life.”

The survey found the length of time Americans are using soap up has also declined. In January, 67 percent said they were scrubbing their hands for 20 seconds or longer compared to 77 percent percent who were washing that long in April 2020. The U.S. Centers for Disease Control and Prevention (CDC) recommends spending at least 20 seconds to lather up, scrub and rinse.

Even worse, more people are just rinsing with water rather than lathering with soap. This January, when respondents were asked if they have simply rinsed their hands with water instead of washing with soap, 48 percent admitted to doing so. In April, the number of rinsers was at a low of 27 percent.

The annual Healthy Handwashing Survey from Bradley Corp. queried 1,050 American adults Jan. 11-13, 2021, about their handwashing habits, concerns about the coronavirus and flu and their use of public restrooms. Participants were from around the country and were evenly split between men and women.